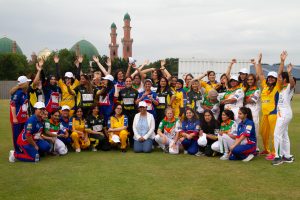 The tournament came about when an image on social media showcasing a group of men, and just one female being given a tour around Park Avenue had been proudly distributed. Naturally, our founder Fatima Patel, was angered by this display, as she felt once again women were not given their equal due and had not been considered as worthy business women who like the men could also support and should have been considered equally as worthy enough of a tour and consideration for support. Following a few exchange of words, a meeting was agreed with Yorkshire Cricket Community (YCC) Development Officer and English and Wales Cricket Board’s (ECB) National Growth Manager – Diverse Communities.

Ownership was taken for the error and it was then challenged that if YCC and ECB created the opportunities and provided the resources would our founder be able to get a female tournament together. Our founder agreed and where two teams of 11 females was agreed,  four teams were established to play for the very first IWCC tournament. Which proves that if given support, resources and opportunities women, YES even those of BAME background WILL play.

The tournament raised close to £13000 for charity and went on to have the largest crowd at Park Avenue, since it re-opened in 2016.

IWF will now be looking to establish an IWCC league and have already started providing cricketing sessions outside of Bradford too.

Along with the IWCC IWF have also established thier first ever IWF sports club, which aims to offer sports taster sessions for a series of sports activities ranging from Football, cricket, rounders, tennis, archery, fencing to netball and more. Women are invited to join for an exclusive membership fee starting form just £5 a month where they would have access to more than 40 classes. The aim then is to help women to find their favourite sport and then sign post them to local sporting clubs to continue engaging in sporting activities.